Some things just piss me off. One of them is assholes who don’t know how to put their shopping carts in the corral area, and just leave them willy-nilly wherever they want to.

I am sure you have seen this behavior before. It crosses class, and state boundaries. From the bargain grocers like Lucky, or Safeway, to the boutique like Trader Joes, or Nob Hill, and even to the swanky, over-priced realm of Whole Foods.

I see abandoned, or poorly placed carts, awaiting for the poor bagger who has to collect them. I know how hard it is to walk the 20 to 150 feet to drop the cart in one of the clearly marked collection points. You are worried that your frozen foods will melt, or that your lettuce will wilt, so you justify that you really can’t afford to delay your departure long enough to walk your fucking cart to the collection area.

This morning, I was sorting through my Photostream and found some images that reminded me of this insanity. This isn’t a complete collection, but what triggered me to pull out the iPhone and snap a pic. 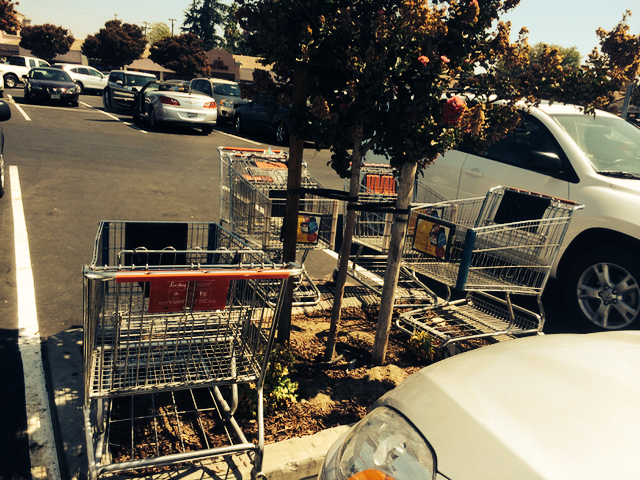 This is where it all began. I assume some hapless soul who has no feet or legs, and thus couldn’t return their cart to the collection point hoisted up the front wheels, and hooked it over the embankment to prevent it from rolling.

Unfortunately, this initial act of douchiness apparently gives license to the other twatwaffles to do the same, and before you know it, multiple parking spaces are blocked because of carts being waylaid in an unauthorized spot.

It is almost comical how this happens, if you sit there for a while, you can watch the sloppy second douches gaining boldness while doing this completely fucked up thing. (The other side of the white car, two spaces down, was a corral for cart aggregation. Fuckers.)

Then, there is the douche that is just too busy to even try to find a dafe place for the cart. They just leave it next to their parked car. 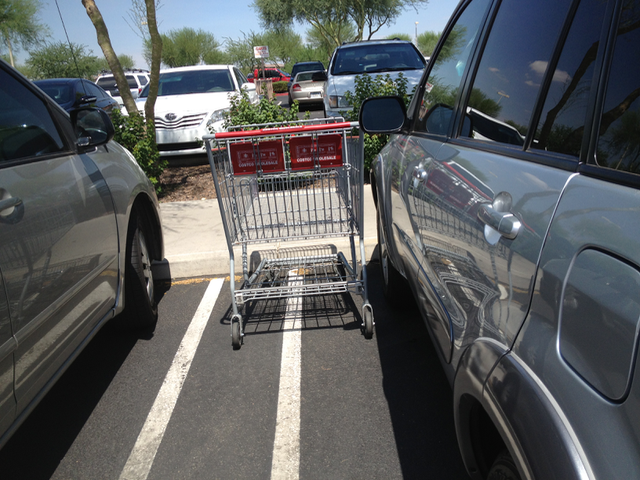 This fucker dropped their cart, and left it. Note that someone has parked their car next to it.

You might say, “hey, it’s their fault for parking there… They deserve to get their car scratched”. But that should be irrelevant. Perhaps there was no other spaces (at the Nob Hill near my house on X-mas eve, I circled for 10 minutes until a space opened up), or whatever, there is now excusing the asshole who did this.

The real problem is that when the bagger goes collecting the carts, they have to extract it from between the cars, a real risk of dings and scratches.

Add to that, this picture was taken in Gilbert Arizona, in August, when the temperature was 110F+. Yes, it is hot for you to walk the cart to the AMPLE collection stations, but think about that poor kid who has to spend twenty or thirty minutes in the hot noonday sun to chase down the stragglers.

You sir or madam, are an asshole.

Then there are those who try to get the carts back to the collection point. But not quite. 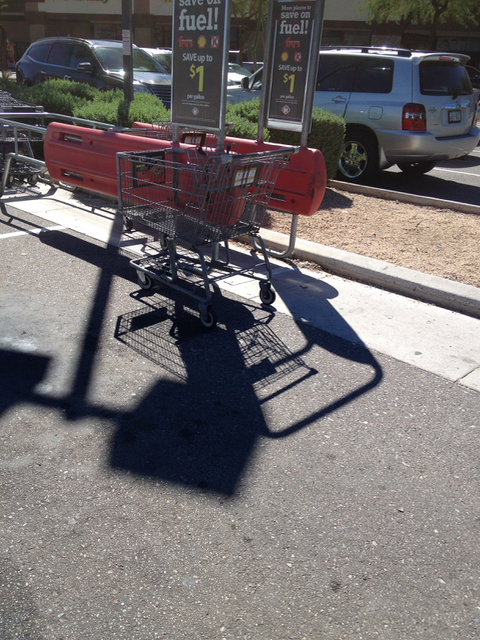 Seriously, you got it this fucking close, why not go all the way and put it in the corral? Is it a principal thing? Are you just trying to be an asshole?

This one is at the new Safeway on Cottle road. Where the parking spaces are all too small, but they thoughtfully have at least two cart collection areas on each aisle of parking, as if to remove any conceivable excuse to not properly park the carts.

Alas, this douche decided that instead of taking the extra effort, expending precious ergs of energy, to put the cart in the well constructed red chute for them, he would just drop it in a parking space to prevent someone from parking.

At this Safeway, as previously noted, the spaces are small, and since the shopping center it is located in is quite busy, the spaces are often full up, losing a space to a douche is inexcusable.

If this seems petty, you are right. In the grand scheme of things, this rates low. But, it is an annoyance, and it is universal.

Just put your fucking grocery carts in the collection corrals, it is really that simple.