It is that time of the year, where I once again mark an auspicious anniversary. On Sunday, January 3rd, 2010, at about 8:00 AM, I had a heart attack.

The morning began as usual, up at 5:00 AM, fed the dogs, had coffee and a light breakfast, a quarter cup of Grapenuts with skim milk. Then I headed to the gym, for an hour of cardio.

I felt a bit off on the elliptical trainer. I was just “blah”, and couldn’t get my pulse above 100 or so from the monitor. I did make the full hour, but I just wasn’t up to the 5 minute cool-down period. So I left the gym, feeling crumby.

I got home, and stepped into the shower. And it hit my like a ton of bricks. Shooting pains out the arms, and it felt like Dom DeLuise was standing on my chest. I stumbled out of the shower, naked, and wet, and walked down to my wife’s office. I told her I needed to go to the hospital.

911 was called, the ambulance arrived, and their prognosis was that I pulled a muscle.

Fortunately, Barbara insisted on them taking me to the hospital. There they hooked me up to the EKG, and yep, I was having a heart attack.

A quick trip to the cath lab, a moment meeting the on duty cardiologist, and a stent was put in.

My wife was freaking out. I remember being worried that I might never see my dogs again.

The verdict: A 100% blockage in the descending node of the right coronary artery. A Taxus drug eluent stent was inserted, opening the artery, and then a trip to the ICU. 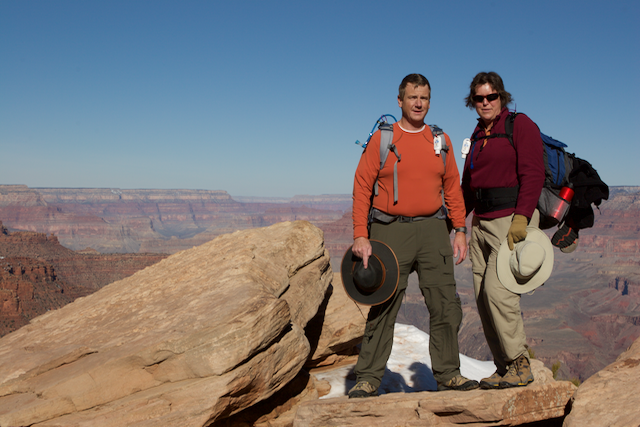 I was in the hospital for 3 days, and 2 weeks later began cardio rehabilitation. 3 days a week, of slowly increasing cardio workout, with telemetry monitoring in a carefully watched environment.

By the end of the cardio rehab, I was freaking out the other patients, as I was jogging on the treadmill. (I was running ~ 30 mile a week prior to the heart attack, hiking Blackett’s Ridge on the weekends, and even cycling).

8 weeks to the day after the heart attack I celebrated by hiking to the bottom of the grand canyon.

I got to add some evil medications that I will take for the rest of my life. Small penalties to pay.

Today, I mark the 6th year since the event. I still take my medicine. I track my blood pressure daily (mostly :-)), I try to watch what I eat. My weight could be better in control, but those damn beta blockers wreak havoc with the metabolism.

As anniversaries go, it isn’t a bad thing to mark off. It is certainly better than the alternative.